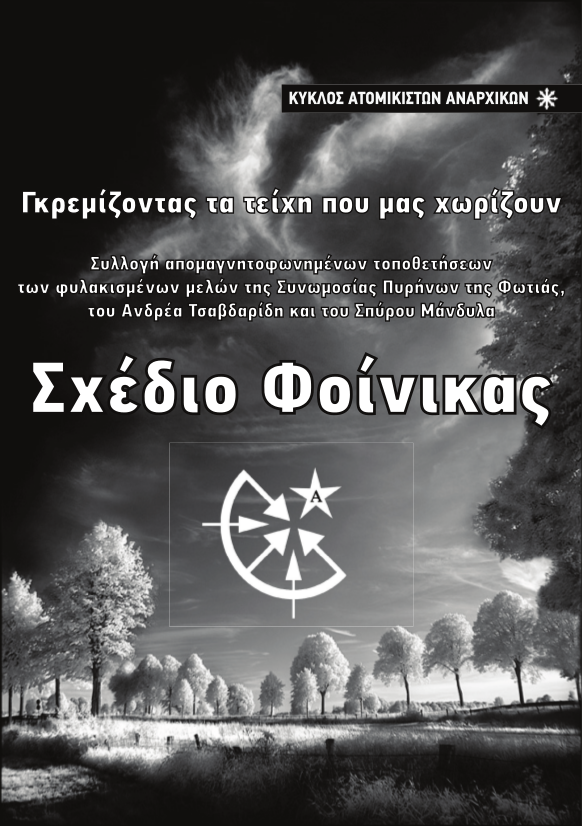 A new pamphlet concerning the Phoenix Project has been released by the comrades of the Circle of Individualist Anarchists which includes transcriptions of the four events held nationwide in solidarity with the persecuted comrades for the actions of the Project which took place recently in Greece.

This is the first of a series of pamphlets regarding the ‘New Anarchy’ which will be released over the coming months which will ‘aim to disseminate our imprisoned comrades speech to as many anarchist comrades in Greece and the rest of the world as possible. This material is available to everyone for translation in any language, a procedure in which we will contribute ourselves, in collaboration with any comrade who wishes for it, in the context of partnership with individuals and groups/collectives with which we are politically associated.’

Introduction– Chronicle of the “Phoenix” Project

2nd event – Athens
Event held by the Convention in Solidarity with the Conspiracy of Cells of Fire and comrades from the New Anarchy Stream – Athens, 13/12/2013 / Andreas Tsavdaridis, Spyros Mandylas and Christos Tsakalos statements.

Solidarity with the imprisoned comrades!

For the new anarchy!